In between fussing with the AVL and warping a couple of other looms for rugs and dishtowels,
I have been working on a Luna moth.

On a Sunday morn this past June, while sitting at the kitchen table, drinking coffee and working the crossword puzzle from the Sunday paper, I looked up and saw this on our screen door! 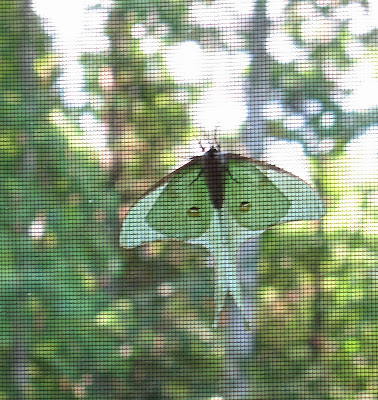 I have always heard it is good luck to see a Luna Moth.

The next day there were two! 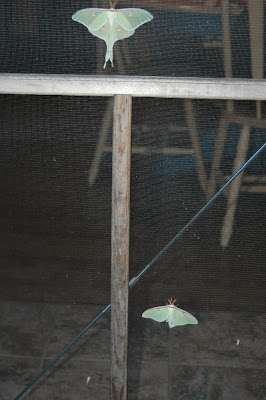 I knew then I wanted to make a Luna moth, so I bought an encyclopedia of Moths and Butterflies to study while planning this one. 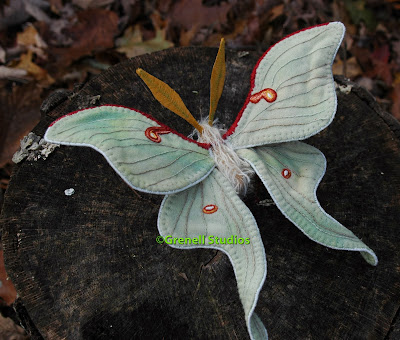 It takes time for me to work out in my mind how to make a new piece like this before it gets to paper and then finally to the construction phase. 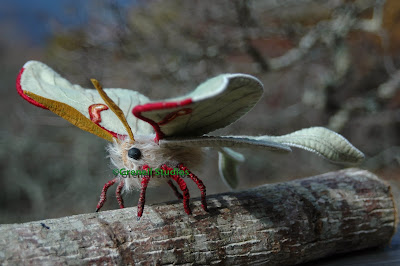 I usually have several new sculptures in my head, but I know when the time is right to make each one. At times they just happen, but others, like this one, take some thought.
I really wanted to finish Luna for the upcoming TRAC tour participant’s exhibition. 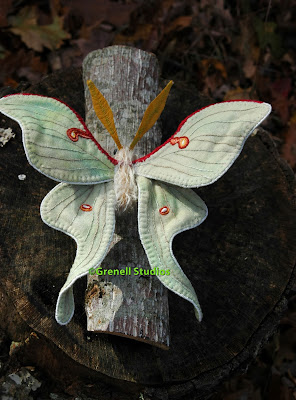 That is where he is headed next week along with a woven hanging. 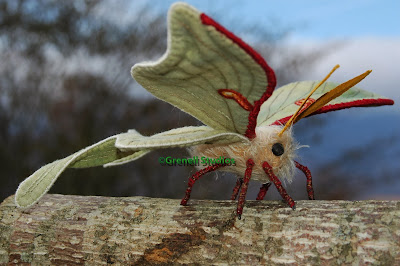 Made with my hand dyed wool fabric, hand embroidery, wrapped wire and mohair body,
Luna has been inspiring to create.
I have a feeling more moths are going to appear in the future!

Happy Halloween!
Wishing you a safe and fun filled day!

My technical difficulty has been getting my AVL loom operating again.
I am ashamed to say that I have not used it in several years.
Last summer I warped and threaded the loom for a large overshot wall hanging but since then the loom has sat staring at me, making me feel guilty and just taking up real estate in the studio.
Finally I said enough is enough.
Either the loom is used and earns its keep or it will be sold.

This is an older 60” AVL loom, built in 1987 with all the bells and whistles of its time.
I bought it second hand from a lady that had rarely used it and it was still in the original boxes!
It’s the Rip Van Winkle of looms. 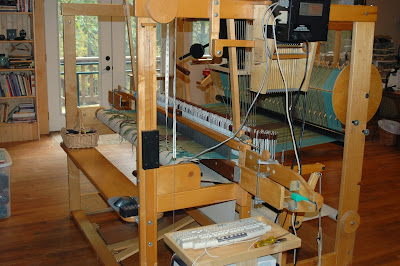 The loom came with both a compu-dobby, manual dobby, double warp beams, double fly shuttle box, reeds, shuttles etc. etc. For those of you who do not know what a dobby is, it is a device on a loom, which controls the action of the harnesses. That is the most simplified way to explain it but if you want to know more then look up Dobby Loom on Wikipedia.
The only thing not on the loom, I wish it had, is the auto cloth advance,
which could be added except the price would be around 700 dollars.
That is not going to happen unless this loom earns its keep,
which it diffidently has not been doing.

I finally have gotten the courage to tackle this loom.
Yes, it does take courage at least for me.
This is no simple loom to use. It took me a whole week just to put the darn thing together.
I had worked on an AVL during a two-year program taught by Catherine Ellis at Haywood Community College’s Professional Fiber Arts Program,
which I graduated from several years ago. They can be amazing looms to work on and
I had wanted one just so I could weave my large overshot wall hangings. I think I have forgotten most of what I learned about these looms during that time so I have had to relearn so much.

One problem I have had is the loom has an older dobby so all of the connections are older too.  I had an older computer to hook up to the dobby but it was cumbersome and took up too much room. I checked with a local computer geek to see if I could somehow connect it to my laptop, which he said would not be possible. Then he proceeded to tell me in complicated terms why not. He told me you cannot find the right connections anymore and that I should just buy a new interface for my dobby or accept my old bulky computer monitor.  A new dobby would be around 3500. dollars so no that ain’t gonna happen either.

Some times I can be like a dog with a bone. Worry it to death, which is what I started to do with being told something can’t be done.  So, Pog built a caddy for my old CPU tower. Now it can sit beside the loom out of the way and is also on wheels for easy moving if need be. 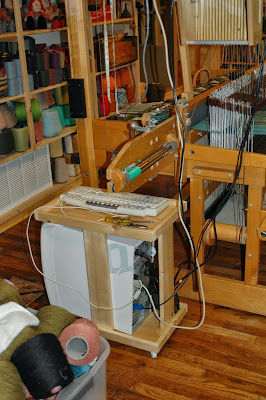 Then I found on EBay a 5ft. older VGA male-to-male 15-pin plug for only 3.99 and free shipping, which fits an older flat screen monitor we already had and connects to the dobby.
Pog then built a hanger to fit on the loom, which can be moved or taken down as needed, so the monitor hangs directly in front of me. 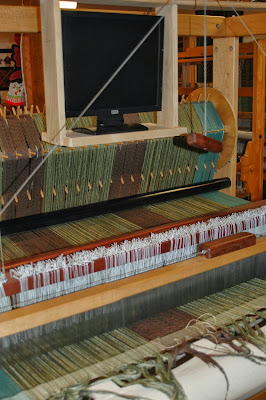 Turned everything on and the dobby just started clicking away!!
Knock on wood but this thing might actually work after all these years!

Now to work on getting the threading errors fixed, 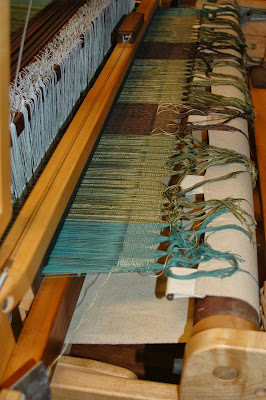 the pattern keyed into the weaving program, get the fly shuttle to work and then maybe be able to weave a hanging after all this trouble and hard work.
I am taking it a little at a time so my brain doesn’t overload and explode!
I’ll let you know how it goes.
Posted by Shuttle, Hook and Needle at Saturday, October 19, 2013 12 comments:

“Time flies when you are having fun”
It also flies when you are working hard, which I have been, both in the studio and outside. It is the time of year when I feel so inspired to sew and weave, but it is also the time of year to start putting flowerbeds and the yard to rest for the winter. I have to admit that I did not do a great job on my flowers this year.
I seem to have grown a lot of weeds! My only excuse is, I have a terrible time coping with the heat, and for us here in the NC Mountains,
there was so much rain this summer!

Now thankfully it has cooled down and is dryer. It is time to gather seeds for next year. I have zinnia seeds my mother gave me from her flowers about 35 years ago. Each year I collect enough seeds to plant the next year and each time I plant them and see them grow, I think of her.
The first row in her garden was always zinnias, sown thickly so it hid the rest of the garden from the view of passing neighbors. She told me that made her garden pretty for everyone to see and hid the fact that sometimes the garden got a little weedy.

I have continued sowing mine the same way all these years even though,
I have no passing traffic to see them.

I have also continued this tradition by giving my daughter a bag of the seeds and she has begun planting them in her garden.

Besides gathering zinnias, cosmos, marigold seeds, and starting to clean flowerbeds, I have been working in the studio.
My cabin rugs are hemmed and tagged. 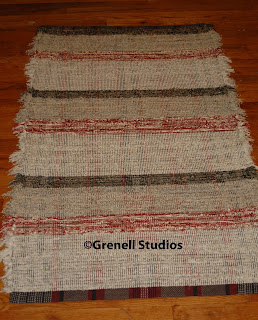 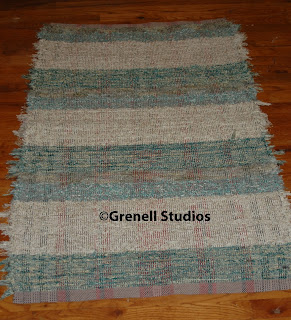 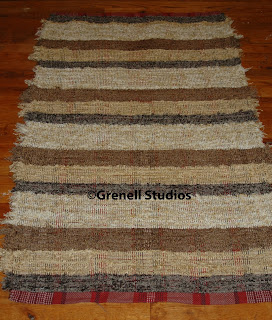 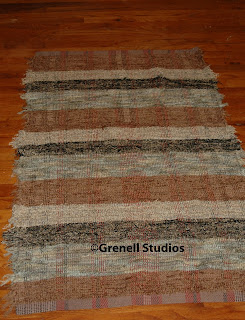 I have been making a few new fall things for my home,
and I have been working on getting the AVL loom operating again.
I’ll let you know how that goes next time!

My birthday was this past weekend and since Pog had to work all weekend I spent the time with my daughter. For my day she took me to the Cameron Antiques Festival. This is normally a quaint little town with trees, old large homes and antique shops lining its streets, but for one day twice a year, the entire place is taken over by antique dealers!

Believe it or not I bought only three small baskets and some wooden pumpkins. It was so hot!  88 plus degrees and I melted. It really made me appreciate our cool mountain air.
Also we visited a couple of quilt shops and I got my free birthday Pumpkin Latte at Starbucks. A lovely weekend spent with my daughter who is one of my best friends along with Pog who is my other BFF. 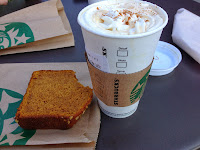 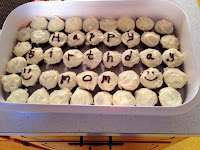 This Saturday was the second part of my birthday. I have for a long time wanted to visit The Depot at Gibson Mill, in Concord, NC. It has 88,000 sq. feet with over 600 antique and designers booths. There is way too much to take in and so much stuff. Pog was a good sport but ended up sitting outside when he got tired but I looked for 2 ½ hrs! I had to stop because my back and feet were hurting. Maybe it is a good thing I don’t live nearby! 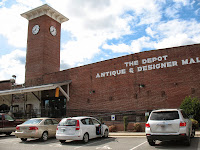 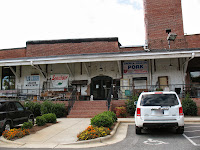 Again - believe it or not I didn’t buy a lot.  I found this nice wooden bowl for a good price, a funky hand made copper funnel and some vintage cotton rickrack. The bowl has this nice smooth feel to it and the funnel reminded me of a hat for one of my pumpkin heads. One day it might just become one! 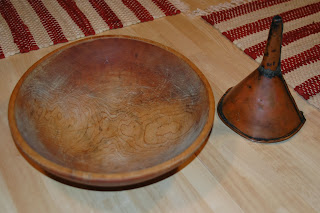 What a wonderful time of year. The mountains are beginning to change color with the highest ridges and slowly creeping down into the valleys. This next week should be peak season here in our section of the mountains. Cloudy, cool with possible showers this morn. I do hope we have some sun this week in spite of predicted showers so we can have good views of the tree color.

I hope you are enjoying your October as much as I am!