Last weekend Pog and I drove to Atlanta, GA to visit Folk Fest and
to meet Lurena Williamson of Tattered Moon! 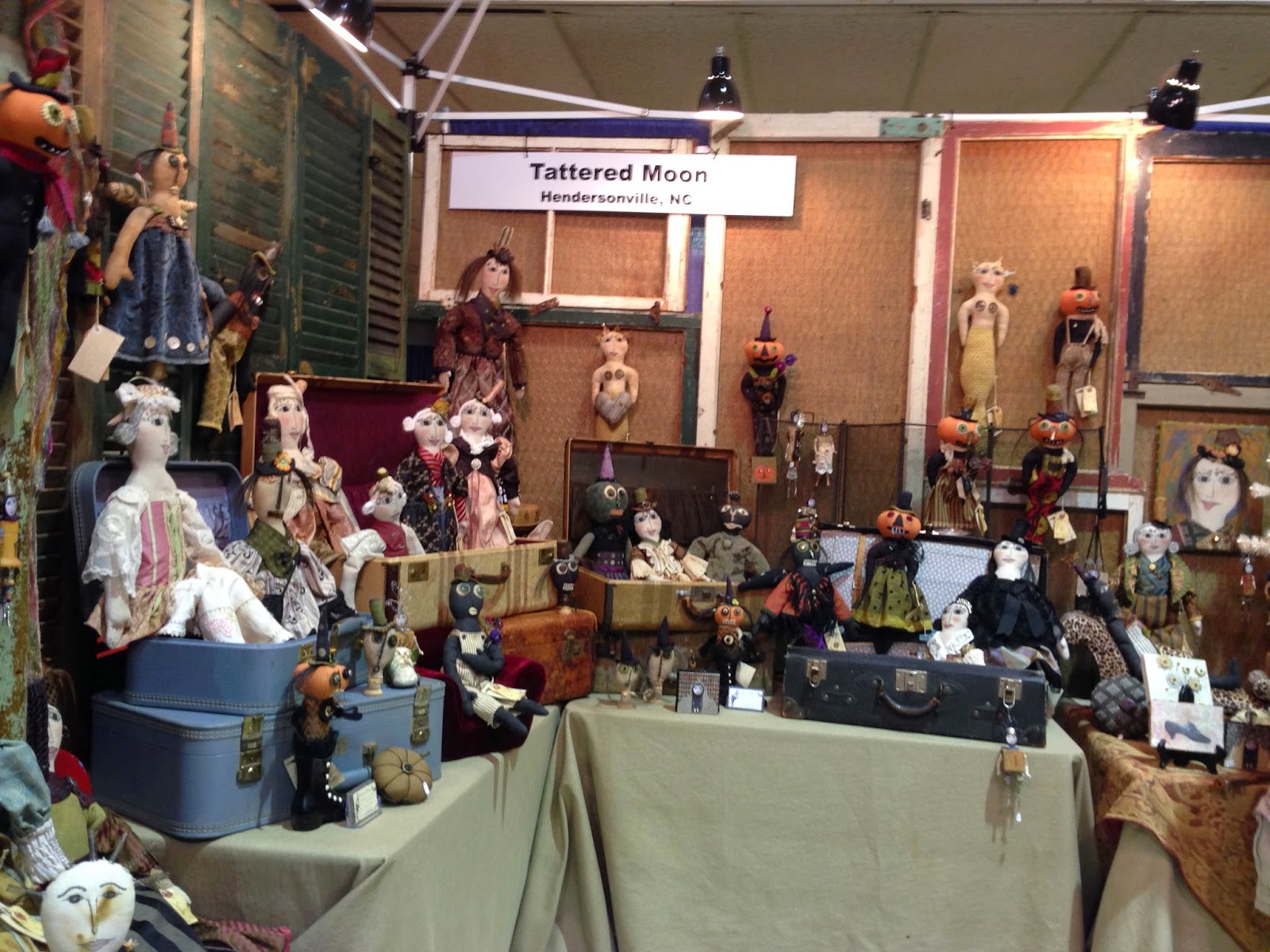 I have followed her blog and have long admired her dolls so it was
a real pleasure to meet her and see the work in person.
Check out her blog at tatteredmoon.blogspot.com

This made the third time we have been to Folk Fest.
The first time we went, there were several art cars in the parking lot.
Pog didn’t think he would ever get into the show because
I was running around looking at the cars!
When we did go into the arena where the show is held, I was blown away by the work.
It is a total assault on the senses of color and freedom of expression.
I don’t think I have been the same since then
and felt so much happiness even on this third visit of ours.
Sadly there were no art cars this year but the work was still awesome.
I have long had an interest in outsider and folk art so it is a real treat to be able to see so many artists in one venue. 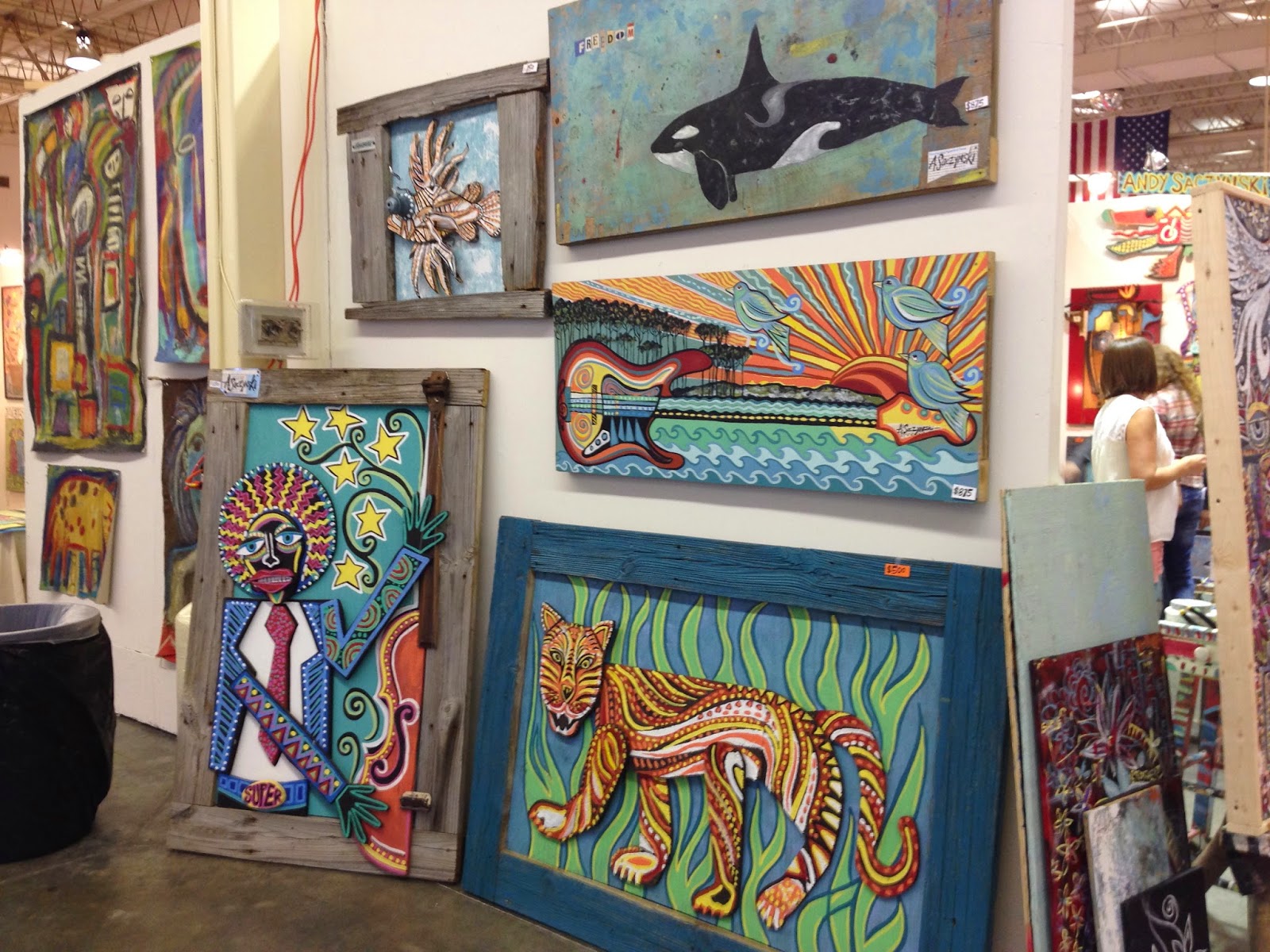 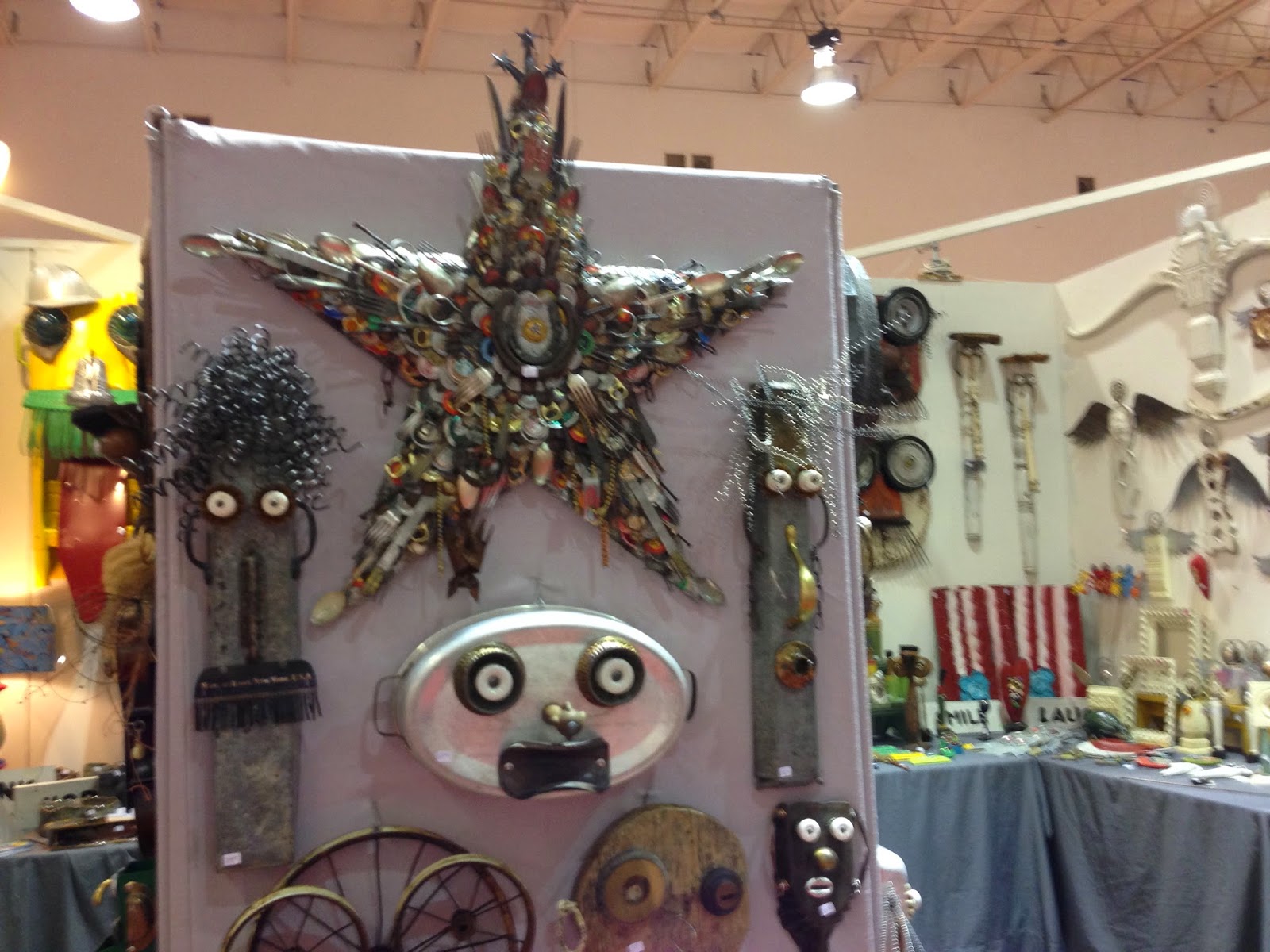 Still weaving away on runners, mug rugs and dishtowels.
I’ve got lots of hemming to do then I will show you what I have been working on.
I have been slow getting things done and I am going to blame it on the heat.
Dog days at the end of summer.
How I long for my favorite season of Fall!
The older I get the less I can tolerate heat and humidity.
Thankfully our mountains do not suffer from heat the way other areas do.
Have a good weekend and stay cool!
Posted by Shuttle, Hook and Needle at Saturday, August 23, 2014 3 comments:

Still in the red, grey and black.

I am saving a couple of these for my son who favors these colors.

Hope you are having a great Sunday.
Gloomy, damp and foggy here but a perfect day to work in the studio.

Email ThisBlogThis!Share to TwitterShare to FacebookShare to Pinterest
Labels: dishtowels

and in the grey and the black.

While at JCCFS a few weeks ago I did have a chance to work on
a draft for my future coverlet.

That pattern (Mary Ann Ostrander from Davidson’s book) is one that I wove when I was 19 years old while taking a weaving semester at Berea College in Kentucky.
I was very brave or maybe just naive to weave an overshot pattern on my second ever weaving.

This throw was woven with both wool in the warp and the weft and it has been so long ago that I don’t remember the reasoning why.
That is not the traditional way for coverlets, which were usually a cotton or linen warp and tabby, with wool as the pattern weft.
I took my throw to the coverlet class to have an example of all the mistakes
I made: beating incorrectly, mistakes in treadling and
sewing the wrong sides together!
Still it is pretty good for an 19-year-old novice.
I would not advise any new weaver to start out on overshot patterns but that is why I fell in love with weaving.
Every throw of the shuttle and the fabric developing was like magic to me.
I have woven a lot of overshot but not in the traditional way.
I love to see what color can do to the patterns and have worked with enlarging or decreasing motifs and tables within the drafts.

This red warp is a table runner using the pattern I wove so long ago
but with a few adjustments in threading and treadling.


The colors are subtle and without a lot of contrast (I’m waiting on a shipment of grey wool which will provide contrast), but will make very pretty table runners. One of them will be a donation for the TRAC auction, which is held in October to raise funds for our arts council.
I’ll post a pic of them when they are off the loom and hemmed.